This morning SeaWorld Parks & Entertainment announced a huge line up for new and exciting attractions, entertainment and much more for next year in 2017 and what there guests can expect. However I am not going to mention all of the announcements but, some of the big and new announcements that guests can get excited for SeaWorld Parks. Here are some highlights that SeaWorld guests and passholders can expect for next year.

First off to mention that SeaWorld has plans to invested about $175 million for 2017 according towards MyNews13 that which are including 5 new experiences that are coming towards SeaWorld Orlando specifically.

One of those new experiences is what SeaWorld Entertainment President and CEO is calling “Kraken 2.0” as SeaWorld’s first virtual reality coaster. Guests can strap on a VR headset and take the plunge in the deep blue sea with immersive story telling and facing distinct aquatic creatures and even the Kraken it’s self.

SeaWorld’s focus and mission is about the preservation and education of aquatic wildlife and teaching there guests about the protection of these amazing animals that live in our oceans. SeaWorld San Diego guests can expect in Summer 2017 a new area called “Ocean Explorer” a 3-acre area that showcases different aquariums and digital technologies. “Ocean Explorer” will also to be home in guests seeing real life octopuses, giant spider crabs, electric eels and many more later in Summer 2017.

“Embarking on these mini subs, visitors will become researchers on a mission to collect data and learn how they can help protect animals. This three-minute experience will include an onboard digital navigation dashboard, as well as a few other surprises along the journey, enhancing the riders’ understanding of our fragile ocean ecosystem.”

Also coming towards SeaWorld Orlando and Diego comes a new kind of night time entertainment and experience called “Electric Ocean” and when the sun goes down that the ocean floor will be light up with bioluminescent, music, and entertainment to engaged guests in a world of ocean wonder.

In the southwestern part of Texas at SeaWorld San Antonio for Summer 2017 too is launching a new generation kind of coaster called “Wave Breaker: The Rescue Coaster” From the Emmy award winning program “Sea Rescue” for the inspiration for this new kind of coaster will engage riders to feel like of what it is like behind the scenes and racing along side SeaWorld’s animal care team and veterinarians. This new coaster will also bring awareness towards injured, sick, orphaned, and abandoned animals in our oceans as part of SeaWorld’s mission to protect these kind of animals. 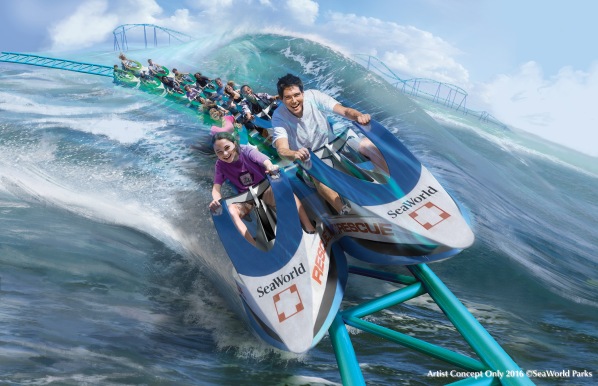 Artist Concept Rendering for “Wave Breaker: The Rescue Coaster” for SeaWorld Antonio for next year in Summer 2017. Source: (©SeaWorld Parks)

Last attraction and highlight I am going to mention is for my fellow Busch Gardens fans that is part of SeaWorld Parks & Entertainment. Next year for Spring 2017, Busch Gardens Williamsburg will be adding a brand new wooden coaster called “InvadR” as part of there classic coaster thrills.

It will be the park’s first wooden coaster to be supported by a steel structure and to give it that classic wooden coaster feel towards it. USA Today reports that the coaster will be a top speed of 48-mph with a 74 foot drop and a 46 inch height requirement to ride.

As for the other major announcements that were announced this morning by SeaWorld Parks they can be found here and here. With so many new things and attractions coming towards the horizon for the parks at SeaWorld it’s a great time to utilize your annual pass and attend towards any of the parks from where ever your from. For myself I am looking forward in seeing the new coaster for “InvadR” for Busch Gardens Willamsburg because of the unique and diversity of coaster of how much that park has to offer in terms of coasters.

Let me know in comment selection below of what you’re most excited for next year at SeaWorld?! For all of your themed entertainment news and more, and for everything SeaWorld and Busch Gardens keep checking back here at SkywalkingAdventure.com