As we do miss the classic The Twilight Zone Tower of Terror at Disney California Adventure that closed down earlier ago this month that has been replaced for the new and upcoming Marvel IP of Guardians of the Galaxy: Mission Breakout! It’s still early in this year as we prepare for the transition for the new attraction to take over at the park but, new details have been released of what to expect for either before or during the film’s sequel release.

Slashfilm reports some new details in which however, not all are new since we already knew about some during the announcement at San Diego Comic Con last year. Here’s some of those details reported from the article: 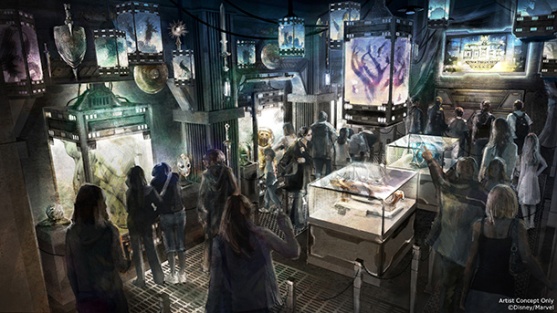 Artist Concept Only for Guardians of the Galaxy: Mission Breakout! at Disney California Adventure. Source: (©Disney)

–The queue will eventually isolate each group of guests in a smaller room where the story details of the ride are laid out.

–You enter the Collector’s office so Rocket Raccoon, who has escaped captivity, can inform you of his plan to break the rest of the Guardians out of the collection.

–Will make use of the existing Tower of Terror ride system, which sends riders flying up into the air before dropping them at speeds that make the stomach quiver.

–Would be set in the personal museum of Taneleer Tivan, otherwise known as the Collector.

–Will feature a soundtrack torn straight from Star-Lord’s Awesome Mix tapes, with different songs coming into play each time you ride.

“This is a comedy, action-adventure, prison break. We need none of that [set-up once on the ride]. We invest immediately in movement… Everything that happens on the ride, from the moment you take off, happens in the context of this very physical chaos. The escape is happening, the other animals are escaping, everything in the collection is loose. The guards are trying to stop them. Rocket is trying to control the vehicle that is out of control because he blew the control tower to open the cages. It’s just insane chaos. But really funny, really fun chaos that ensues for the rest of the ride.”

He also “promises a “complete, tonal shift” that will have little in common with the slow build-up and sudden release of the original attraction.”

The attraction for Guardians of the Galaxy: Mission Breakout! is slated to be around some point during the summer although no approximate date has been confirmed yet. For everything Disney and all other themed entertainment news, keep checking back here at SkywalkingAdventure.com