As it was shared last week in where the Avengers are setting up campuses at Disney Parks worldwide from California, Paris and Hong Kong. Beginning in 2020 in where you can suit up and fight along with your favorite heroes from Marvel at both Disney California Adventure and Disneyland Paris. As they are set up the next generation of heroes around the world.

Artist Concept Only for the Avengers Campus at Disney California Adventure.  Source: (©Disney©/Marvel)

“In some ways, these new campuses are like the Avengers themselves: a group of diverse individuals who have teamed up for the same purpose,” said Scot Drake, Creative Executive, Marvel Global Portfolio, Walt Disney Imagineering. “This collection of unique addresses—each dedicated to a different discipline—have been brought together to champion the next generation of heroes.”

One of the Avengers campuses will be called “WEB”-Worldwide Engineering Brigade that will house Spider-Man experience and which will be the first Disney-through attraction to feature the web slinger.

As both campuses, one of the most iconic buildings within Marvel is the Avengers Headquarters and where you may catch a glimpse of the team on top of the rooftops. Chairman Bob Chapek also mentioned at the D23 Expo 2019 and where you can able fly the Quin Jet but, the details weren’t expanded upon in how you can able to fly the jet.

The campus will open up in phase two as the Quin Jet will be an E-ticket attraction. Here’s the full details of the attraction: 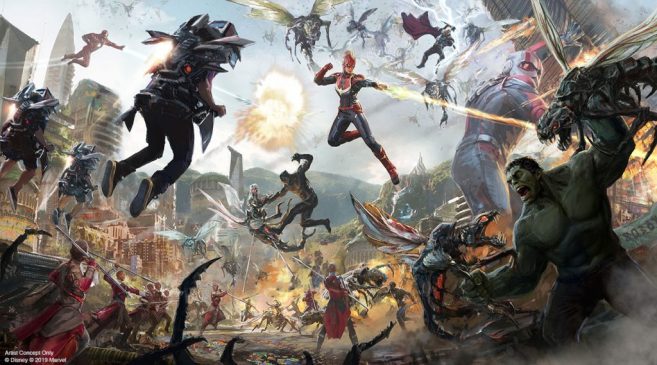 Swing by the Pym Test Kitchen from Ant-Man and The Wasp on the Avengers campus as they Dr. Pym will use his “Pym Particles” to grow and shrink just about anything. His latest technologies are using the latest innovations to grow and shrink food at this eatery

Encounter Doctor Strange of the “Mystic Arts” including Black Widow, Ant-Man and The Wasp, the Guardians of the Galaxy, Super Heroes from Wakanda and Asgard, and Iron Man.

Artist Concept only for the Doctor Strange area at the Avengers campus. Source: (©Disney©/Marvel)
More details to come for the Avengers campuses across the world and for everything Disney Parks & Resorts and all other themed entertainment news, keep checking back here at SkywalkingAdventure.com.
Follow all the latest themed entertainment news, tips and tricks, reviews and more over on Facebook, Twitter, and Instagram!
Source: Disney