This is one gingerbread house that you certainly don’t wanna miss this year. Source: (©Disney)

This culinary dessert was no easy task as it took “13 spooky days” to come up with this creation. Six talented culinary cast members from the Disneyland Resort Central Bakery team that have been working hard on this year’s creation. Three out of the six cast members have been mesmerizing this annual tradition since 2001 when the overlay first started. This year is the 19th season of making this huge dessert, with inspiration and innovation each year.

Some of the most recognizable faces will be part of this year’s tasty creation. Source: (©Disney)

Here’s what Tim Wollweber, associate art director for Disney Parks, had to say who designed this year’s gingerbread house:

“We tried to keep it as faithful to the Haunted Mansion itself so guests could immediately get that it’s the mansion, and know that it’s a heartfelt ‘dead-ication’ to it,” said Wollweber.” 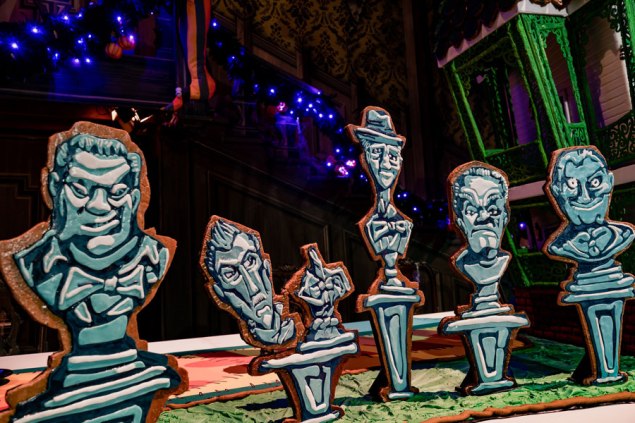 A group of dessert singing busts in the Grand Hall. Source: (©Disney)

Wollweber also elaborated on the details of the structure that him and his team designed some interesting details that are part of the attraction.

“We have lantern bits in there, doors where they generally would be found, green iron work in there…we’ve never really done that before.”

“More than any of the other designs we’ve done, this one is a great labor of love that pays tribute to what’s been around for half a century. This is our congratulations for haunting a place for 50 years and we are happy that people still love it.”

The groundskeeper and his dog will be featured as well in culinary creation. Source: (©Disney)

This creation stands at 10-feet tall that includes familiar faces that fans of the attraction love dearly to them. There are 15 ghostly residents of The Haunted Mansion that are made out of gingerbread cookies ranging from 24 to 30 inches tall.

Here’s a complete breakdown of all the ingredients it took make this dessert:

You can experience the gingerbread house starting today at the Disneyland Resort through out the Halloween and holiday season in celebrating the 50th anniversary of The Haunted Mansion for some ghoulish delight!