I don’t know about you guys, but the autumn nights and where the air is deathly still gives me the daydreaming thoughts of Halloween is approaching within the coming months of September and October. If your not a big fan of Halloween as I am, and wanna grab those sugar coated cookies, chocolate desserts, and egg nog, you should be excited for the Christmas parties in November and December. All of these annual special ticketed events at the Magic Kingdom are one of the most popular events within the Walt Disney World grounds if your planning on attending either one of them.

As just a quick update the tickets went officially on sale this morning at 12:01 am EST but, the pricing and dates were leaked out ahead its scheduled release before the Disney Parks Blog made the official posting hours later. As a first timer and never done any of these special ticketed events I bought my ticket for myself and my mom for Halloween night when they first became available but, it was more expensive cause Halloween is the hottest ticket that sells out the fastest and with $20 increase from last year.

Here’s what the pricing, dates, and details will be for both the Halloween and Christmas Parties at the Magic Kingdom according towards the Disney Parks Blog.

Mickey’s Not-So-Scary Halloween Party: For all my 90s Disney fans out their, the Sanderson Sisters of the popular cult classic film of Hocus Pocus will be returning back for the stage show of “Hocus Pocus Spelltacular” with also the annual ” Happy Hallowishes” and the Boo! To You Parade.

Mickey’s Very-Merry-Christmas Party: The Disney Parks Blog also confirmed from the same team who did the “Hocus Pocus” show will be adding a new show called “Mickey’s Most Merriest Celebration” and making its debut for the 2016 holiday season. “In this all-new show, Mickey and his pals invite some of their friends over for an unforgettable Christmas party filled with music, dancing, color and fun. Look for Woody and Jessie from “Toy Story,” Fantasyland friends such as Peter Pan and Snow White, and many more!” Of course, you can’t go wrong with also not seeing the annual “Holiday Wishes” fireworks too by Cinderella’s Castle. 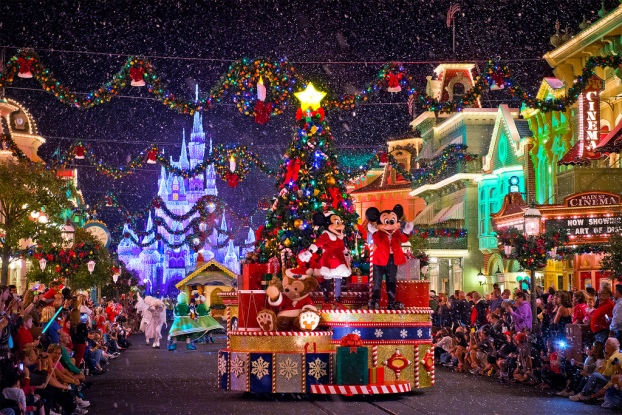 You can enter the park as early as of 4pm and the party doesn’t start till 7pm-12am but I will take note of this since, this is something I always wanted to do on my Disney Bucket list to share and experience one of my favorite holidays through out the year. I will be able to share this experience for the Halloween party here on my blog within the upcoming months and all other theme park goodness and all the latest news and coverage here on SkywalkingAdventure.com

Please feel free to contact Disney Guest Relations at 407-W-DISNEY with any questions or concerns you have or your local travel agent to able to purchase your ticket of your choice for any of these events. These will guarantee to sell out, so best advise to purchase early before it’s too late for both of the holiday parties. Please also take note of the new updated costume guidelines and polices for the Halloween party of what is acceptable and what is not: Walt Disney World Costume Policies and Guidelines