Even though we are still the in the bitter and midst cold of the winter season and most of us are already thinking about vacationing somewhere else warm for the spring. Well some good news for you Disney fans out there that, they have released concept art for the brand new and upcoming family waterslide announced back in August last year coming to Disney’s Typhoon Lagoon at the Walt Disney World Resort.

Note: Just a quickie update that now the official site say’s “Miss Adventure Falls” instead of “Miss Fortune Falls” and was probably a last minute name decision by Walt Disney Imagineering to make it more stand out and sounding better. 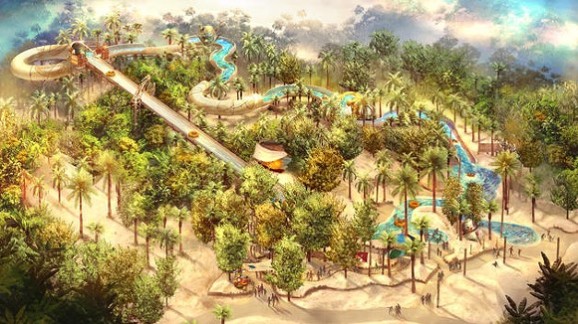 Here are the details that describe the brand new water slide:

“Gather your crew and climb aboard for a thrilling, white-water voyage you won’t want to “Miss.”

Just beyond the pineapple fields of Crush ‘n’ Gusher awaits an all-new, family-raft attraction owned by Captain Mary Oceaneer—a sea-faring treasure hunter whose haul was caught in a rogue typhoon… and scattered across this tropical paradise years ago.

From your 4-person raft, feel a rush of excitement with family and friends as an aquatic conveyor belt chutes you into action. Then, hold on tight as you spy precious artifacts collected from all around the globe.

If you’re lucky enough, you may even meet the captain’s old diving partner—an Audio-Animatronic parrot who’s still hunting for treasures at Disney’s Typhoon Lagoon water park to this day!”

No official opening date has been announced yet by Disney but, probably a spring opening time frame could be the estimate prediction about it. For everything and all other themed entertainment news, keep checking back here at SkywalkingAdventure.com.