Chairman Chapek confirmed that the Disneyland Resort will open up first and followed up by the Walt Disney World Resort at Disney’s Hollywood Studios. The official name for these two expansions will be called “Galaxy’s Edge” for both parks in California and Florida. The name was being reported in being leaked out by Redditor user, “wityblack” who data mine the official Star Wars name on the Disneyland Reddit page before the official announcement this evening. The post was immediately removed, minutes later by the Disney Parks Blog yesterday.

The name may sound all opinionated towards many Disney fans in the community but, it fits perfectly with the themeing since these two expansions take place in the “Outer Rim” of the Star Wars universal galaxy. Travelers will take place of the planet in a remote trading outpost and your choose your own adventure of your own actions and decision making can affect the Resistance or the First Order. The expansions will feature two major attractions that puts them in the heat of the Resistance and the First Order.

The first attraction will immerse intergalactic travelers to feel like you’re on a Star Destroyer hangar bay on a portion scale, that has never been before. The second and most other highly anticipated attraction will give you the chance to pilot the iconic Millennium Falcon and shooting blasters or preparing for hyperspace in making those Kessel run jumps on a dangerous mission.

Artist Concept Only for the Star Destroyer attraction. Source: (©Disney)

However, the mission becomes a choice of choose your fate. Performing a certain task can reward you with extra galactic credits if you choose to succeed with you and your flight crew. If you fail to do so and choose the wrong path, your name could show up on a bounty hunter’s list by the name of a hunter named Harkos. You probably could end up being a local problem for other locals and travelers at their cantina bar if you make negative choices! 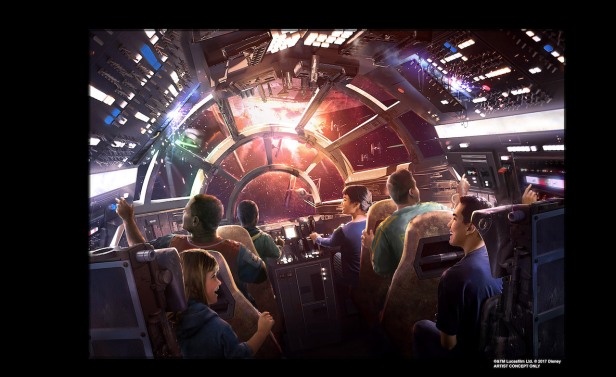 Artist Concept Only for the Millennium Falcon attraction. Source: (©Disney)

Some very similar faces will show up in Star Wars: Galaxy’s Edge including BB-8 from Star Wars: The Force Awakens and The Last Jedi and everyone’s favorite Wookie, Chewbacca- The First Order and many others too. Also if your familiar with your favorite droid pilot of the classic “Star Tours” attraction, Rex- who will be taking a new role as the local DJ at the cantina bar. (Blue milk will be included too) and acquire trinkets and treasures from across the galaxy.

No official confirmation for when Walt Disney World’s Star Wars: Galaxy Edge will open up and be sure to stay up towards the Disney Parks Blog for updates.

Tomorrow is the last official day for this year’s D23 Expo and for everything Disney Parks & Resorts and all other themed entertainment news, keep checking back here at SkywalkingAdventure.com

Have yourself a magical day at the D23 Expo!