Based on of Blumehouse Productions most popular franchise films of Insidious that is about tortured souls of the dead and the levels of the “further” that takes upon a paranormal/horror/thriller experience of these film series. In addition in which the upcoming Insidious: Chapter 4 and was originally scheduled for a Fall 2017 release but, got delayed for a January 2018 release date instead. 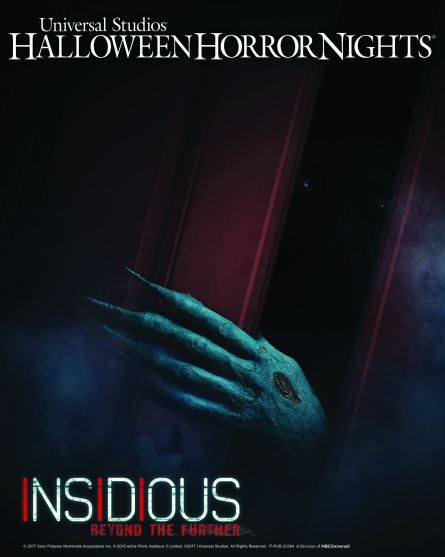 For this year’s Halloween Horror Nights for Insidious: Beyond the Further will combine all four chapters and elements ahead of the film’s release next year and the paranormal past of Dr. Elise Rainer of the souls that haunt her.

Here’s the official description for this year’s maze at Universal Studios Hollywood:

“The creepy new maze will delve deep into brilliant parapsychologist Dr. Elise Rainer’s past, starting with a childhood in which her paranormal abilities emerged…until her mother’s untimely death by a demonic entity. Troubled by a lifetime of evil supernatural spirits trapped in the Further—a vacuous netherworld caught between the living and the dead—Elise will take guests on an unsettling journey back in time through a portal into the Further to defy the most depraved and intimidating beings that have tormented her since the 1950s.”

The Insidious franchise is one of biggest horror’s top grossing films and has taken upon $189.81 million at the domestic box office for unadjusted for inflation – adjusted, that figures increases to $201.8 million. Globally in which the series has taken up towards $371.9 million unadjusted for inflation. Insidious: Chapter 4 will be directed by Adam Robitel and written by co-creator, Leigh Whannell and produced by Jason Blum, Oren Peli, and co-creator James Wan.

Insidious will be now be joining the line up with American Horror Story: Roanoke, The Shining, Ash vs. Evil Dead, Titans of Terror Tram, and all original scare zones. Halloween Horror Nights 27 kicks off this September 15th-November 4th, 2017 for both coasts at Universal Studios Hollywood and Universal Orlando Resort.

Check out the trailer from the film series down below and for everything Universal Parks & Resorts and all other themed entertainment news, keep checking back here at SkywalkingAdventure.com