As many other media outlets are reporting about Star Wars: Galaxy’s Edge coming towards Disneyland and Walt Disney World, will be one of the most immersive and advanced attractions that Walt Disney Imagineering and Lucasfilm Ltd., have ever created.

New Resistance recruits will be in between a firefight between the Resistance and the First Order, including Kylo Ren. The attraction is called “Rise of the Resistance” and guests will undergo a journey through a full-sized starship and aboard a Star Destroyer. Rey (Daisy Ridley), Poe Dameron (Oscar Issac), Finn (John Boyega), and Kylo Ren (Adam Driver), have used footage of themselves to be placed within the attraction.

Entertainment Weekly has detailed the full story for “Rise of the Resistance” and if you wanna read it by checking it out here. *SPOILERS AHEAD*

You’ll be come face to face with the First Order in their Star Destroyer once on board. Source: (©Disney/©Lucasfilm)

Disney Imagineering and Lucasfilm Ltd., as well with directors and producers J.J. Abrams and Rian Johnson are working closely maximize the experience. Here’s what they had to say about it: 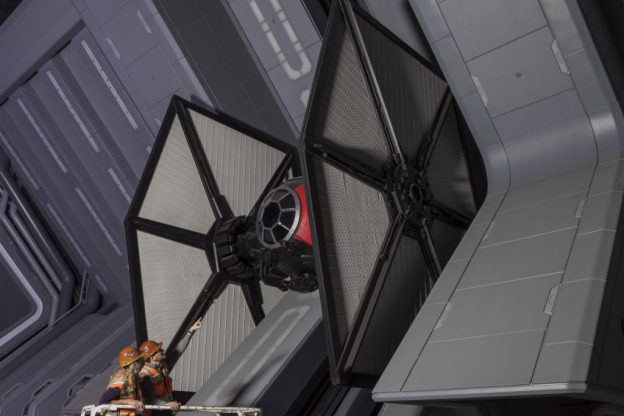 First Order practical TIE Fighters will be on board the Star Destroyer and straight out from the film franchise. Source: (©Disney/©Lucasfilm)

Rumors were floating around the Internet and saying this attraction will be “28 minutes long” and Disney Chairman of Parks, Experiences, and Products Bob Chapek shot down those rumors according towards Nerdist. He did say however, “it’s “the longest attraction we’ve ever developed with a ride vehicle.”

The ride vehicles will be trackless and will be ant-size up against fully-practical AT-ATs and being right in the middle of the action, between the Resistance and the First Order.

Artist Concept Only for Rise of the Resistance and being up close against two giant AT-ATs.  Source: (©Disney/©Lucasfilm)

“Calling it “one of the most complex things we have ever done,” Reardon promises Star Wars: Rise of the Resistance is replete with “experiential, jaw-dropping, how-did-they-do-that? moments.”

“Rise of the Resistance” will take over most of the 14-acre expansion because of how massive the attraction will be and if you read the story details up above, then well…be prepared for a Star Wars life changing experience that Disney has ever created for an attraction.

If you have missed the previous posts for Star Wars: Galaxy’s Edge, be sure to check them out down below: