No matter what kind of Star Wars fan you are either casual or hardcore, any new piece or kind of Star Wars related piece of information gets any fan anticipated and wanting more and more for what’s next in the Star Wars saga universe. The Walt Disney Company has officially released more concept art for another sneak preview for the highly anticipated Star Wars land coming towards Walt Disney World at Disney’s Hollywood Studios and Disneyland. Specifically this piece of concept art was previewed for Disneyland only so far that was shown a couple days ago via on The Disney Parks Blog. 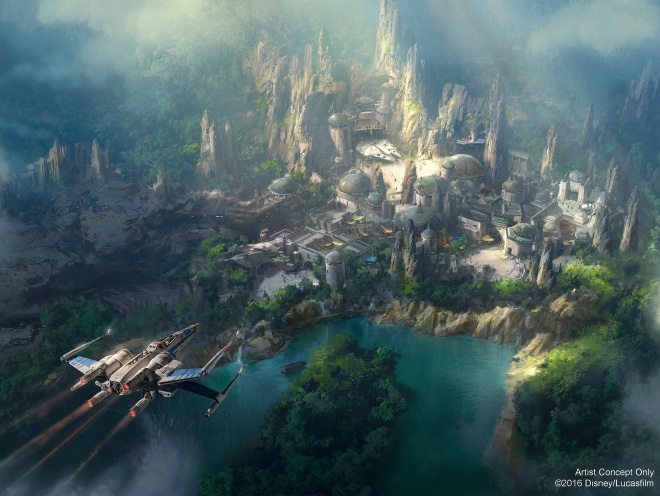 The Disney Parks Blog also pointed out in this image released that “Look closely and you may find hints of some of the thrilling experiences that are coming – like the Millennium Falcon peeking out of one of the cargo bays, marking the location where guests will get the opportunity to pilot the fastest hunk of junk in the galaxy.” In the location where the expansion for Star Wars in Disneyland will be located as stated by the blog that “A new image has been unveiled on the fence along Big Thunder Trail in Frontierland – one of the entry points to this never-before-seen planet in the Star Wars galaxy – revealing more about what guests will find in this all-new land.”

The announcement for Star Wars land expansion was relieved last year at the D23 Expo 2015 in Anaheim, California for a 14 acre land and be the largest expansion on the Disneyland Resort. No confirmation date yet for when Star Wars will be completed but keep checking on the Disney Parks Blog and my blog for any future updates. In a galaxy far, far, away and everything Star Wars keep checking back here at SkywalkingAdventure.com