Last month (in June) I reported a rumor for the Muppets at the time was possibly coming towards the Magic Kingdom at some point. This rumored was being reported by no other then WDWNT who breaks the latest stories for rumor speculation for Walt Disney World news for attractions. Well that rumor can be officially be confirmed now that, today the Muppets are a green light with a press release statement on the Disney Parks Blog.

Here’s the official statement released by the blog and details behind it:

“Beginning this fall, the Muppets will be visiting Magic Kingdom Park, where they’ll take part in an all-new live show, “The Muppets Present… Great Moments in American History.”

“Sam Eagle, the fiercely patriotic American eagle who is forever trying to set a high moral standard for the Muppets, will join Kermit the Frog, Miss Piggy, Fozzie Bear, The Great Gonzo and James Jefferson, town crier of Liberty Square, as they gather outside The Hall of Presidents to present historical tales in hysterical fashion as only they can. From the midnight ride of Paul Revere to the signing of the Declaration of Independence, the Muppets appear throughout the day to share with Guests, their own unique take on the founding fathers and the birth of the United States of America.” 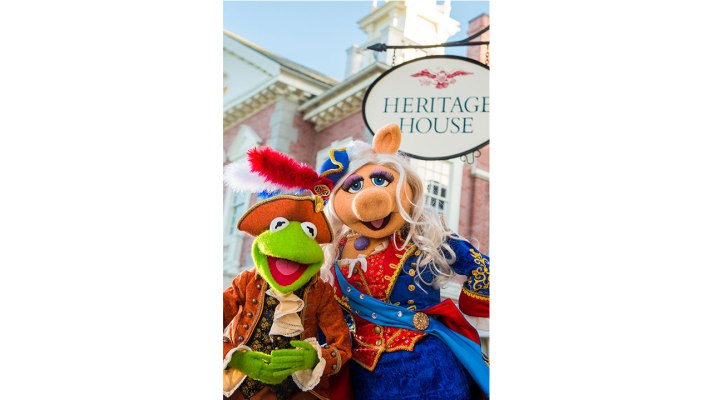 Kermit the Frog and Miss Piggy in there new colonial attire for the new show of “The Muppets Present…Great Moments in American History” Source: (© Disney)

The new show will also include a brand new original song for “The Muppets Present…Great Moments in American History” and will be officially debuting this October 2016.

As a avid Muppets fan I am really thrilled and excited to see some Muppet content in the Magic Kingdom finally. Since in my last post that the Muppets are just focused on Disney’s Hollywood Studios and now are going to be in two parks on the Walt Disney World property.

Let me know down in the comments section below guys, that are you excited or have mix feelings about this?! For all your Muppeting around and everything else Disney and other themed entertainment news, keep checking back here at SkywalkingAdventure.com