After finally seeing the confirmed filing of the permits by the Reedy Creek Improvement District, in which the blast from the past of the gondolas are coming back towards the Walt Disney World Resort. In which construction walls are currently up right now for the stations of the gondolas near Epcot in which last night, that they were officially confirmed for making their return at the D23 Expo.

With the speculations being true and now official in which, the gondolas will connect from- Disney’s Art of Animation, Pop Century, Caribbean Beach Resorts and for the parks will between Disney’s Hollywood Studios and the International Gateway at Epcot. The official name for the gondolas will be called the “Disney Skyliner” and will feature favorite Disney characters. 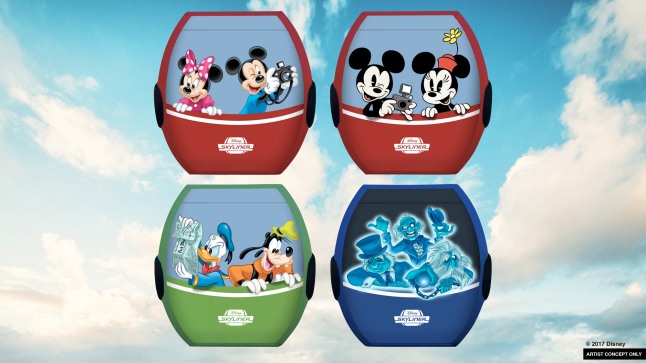 Artist Concept Only for the model representation of what the gondolas will look like between Disney Parks & Resorts at Walt Disney World. Source: (©Disney)

However, that’s not all what the Disney Parks & Resorts announced the other night in which a new transportation service will feature “Minnie Vans” based on the fabulous and iconic Minnie-Mouse. This service will take you anywhere around the Walt Disney World Resort and riding it classic, Minnie style! Here’s what Chairman Bob Chapek had to say about this service.

“Since we’re all about exceeding guest expectations and making every aspect of your vacation uniquely Disney, we’re creating a new point-to-point transportation service in a way that only Disney can do,” Bob said.

No official word of when the gondolas and Minnie Vans will debut but, check back more at a later time once these new ways of transportation roll out. For everything Disney Parks & Resorts and all other themed entertainment news, keep checking back at SkywalkingAdventure.com