Aside from official name of Star Wars: Galaxy’s Edge being next door towards the Toy Story Land expansion at Disney’s Hollywood Studios has now a official opening time frame of when it’s opening up. In the past in which many updates & details have been shared about it and Bob Chapek, of the Walt Disney Parks & Resorts officially announced that the Toy Story expansion will open up next summer in 2018!

Guests will be shrunk down “toy size” and explore the world of Andy’s backyard with some recongzlible faces of the Toy Story trilogy including Woody, Buzzy, Jesse and more. The expansion will feature two attractions of the Slinky Dog Dash coaster as you’ll zip, dodge and dash, and lots of turns in which Andy has created to stretch’s Slinky’s coils. 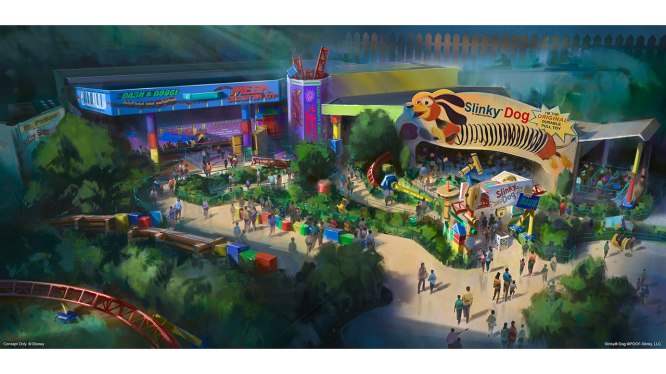 New Artist Concept Art Only for the Slinky Dog Dash coaster that is one of Toy Story Land’s attractions opening Summer 2018. Source: (©Disney)

The second attraction is the Alien Swirling Saucers and it is designed as a toy play set that Andy got from the famous Pizza Planet inspired the first “Toy Story” film. Aliens will be flying around in their toy flying saucers and trying to capture your toy vehicle with “The Claw”! “Oooooohhhh!!”

No exact date hasn’t been announced but stayed tuned for future details and update! For everything Disney Parks & Resorts and all other themed entertainment details, keep checking back here at SkywalkingAdventure.com