Who wants to play a game?

We are coming really close before the kick off for this year’s Halloween Horror Nights at both the Universal Orlando Resort and Universal Studios Hollywood in which the famous puzzle and creative killer of “Jigsaw” is back this year. One of the biggest and respected names in the horror industry of the “Saw” series is back and better than ever with the most complicated and creative traps of the eighth installment of the “Saw” series that is known as “Jigsaw”. 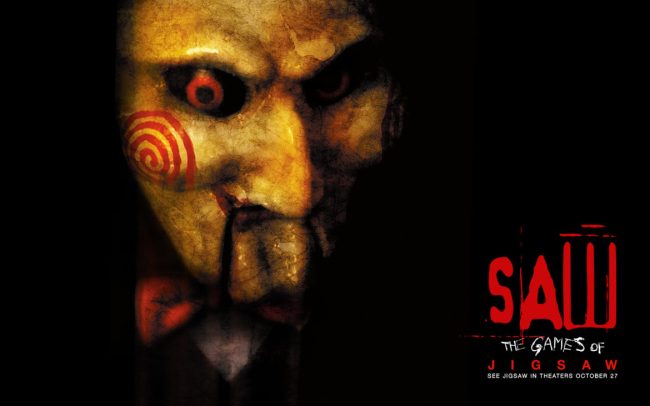 Originally announced as “Saw: Legacy” and was changed towards now as “Jigsaw” will be giving guests a true faith of their own test to survive, behind the mastermind of “Jigsaw” has thought of this year. The film was first introduced in 2009 for the event with the release of “Saw VI” under the studio of Lionsgate that used numerous traps that were brutal and goriest ways of Jigsaw victims under his creative ways of traps. Now in which Universal is letting the film series come back known as “The Games of Jigsaw” for Halloween Horror Nights 2017.

Here’s how Universal is describing it for this year for the event and what Jigsaw has up his sleeve this year:

“Jigsaw’s return in our brand new haunted house—SAW: The Games of Jigsaw—allows us to place our guests into the twisted situations that fans of the film series have grown to love throughout the years. And while there are nods to the Halloween Horror Nights 19 house, make no mistake:  this is not that house.”

“Also, placing the house in a different location this time around gave us another way to elevate the scares. SAW: The Games of Jigsaw functions as one large trap. You’ll be funneled through claustrophobic, visceral experiences and be a part of the most terrifying “games” ever devised on screen. Trials that you may be familiar with and some that are completely unknown to you— sounds fun.”

Universal also does mention that their will be a new trap that you’ll be involved with *SPOILER ALERT* for the “Jigsaw” film release this coming October 27th, 2017 and advise to go see the film before doing the house to not to be spoiled. “Jigsaw” officially joins the ranks now with “Ash vs. Evil Dead”, American Horror Story, and The Shining with teasers that Universal teased of original houses, TBA scare zones, and questioning of an icon or not this year.

Halloween Horror Nights kicks off this September 15th-November 4th, 2017 as a record breaking 34 selected nights at both the Universal Orlando Resort and Universal Studios Hollywood. Ticket information and pricing can be founded here for your selected nights for attending the event.

Check out the announcement video down below and for everything Universal Parks & Resorts and all other themed entertainment news, keep checking back here at SkywalkingAdventure.com