As it seemed like a very long content drought about information and new details for Halloween Horror Nights fans and now which that period seems to be finally over. We are approaching the event that is creeping upon us, that is starting up next month for this year’s event at the Universal Orlando Resort. Now which today was the full release for scare zones and the return of the highly energetic and hardcore choreography group of Academy of Villains.

Universal is describing of this so-called thematically approach calling it “Festival of the Deadliest”, an ancient tradition from the depths of where nightmares are born as their overall concept.

“A gathering of the most unearthly, hellish terrors has emerged from the darkest corners of despair. It calls to those who long for the thrill of the scare and wish to have their fears made real. You’ll be drawn like moths to a flame, and once you join this hallowed celebration, your nightmares will never end.”

“You’ll find the heart of the Festival on the streets of Hollywood in Universal Studios Florida, but its claws have spread throughout Horror Nights. Here’s what awaits you every night… “

But most of you are here for the scare zones and what terrors lurk ahead this year’s Halloween Horror Nights and let’s dive right into it!

From the popular Halloween/horror cult classic by Legendary Pictures of “Trick r’ Treat” that will be located in the Central Park scare zone and fan favorite and main character from the film of Sam, to make sure guests will follow the rules of Halloween. “As a longtime fan of classic horror anthology films, Trick ‘r Treat is a favorite of mine that pays perfect homage to that genre. In this zone, you’ll have the opportunity to come face-to-face with several characters from the film, and learn for yourself what happens when you don’t follow the rules.”

A nation reborn and may god be with you all! The annual commence and tradition of the The Purge of where crime and anything else is legal for 12 straight hours and set to return for this year’s Halloween Horror Nights. Returning back towards the New York streets for this scare zone in which of what Universal thinks of this annual event will pan out for the Purge night.

“There are some fan favorites returning such as our auction and a very polite gentleman. We also have some new surprises in store. For example, how do you clean up all the mayhem on the streets during a Purge night? Visit the clean-crew up crew with their trusty wood chipper to find out. Just don’t get too close…”

Located in the “Avenue of Stars” or Production Central main entrance when you first walk in towards the park and something brand new in which Universal has never done for their fans. “In this zone, we’re taking some of the larger than life characters featured in this year’s houses, and letting them have their own scare zone. A lot of work goes into bringing these iconic film characters to life in our houses. Now you’ll have the opportunity to get an even better look at them.”

If your a fan of the sci-fi genre or monsters movies in general, well prepare for this scare zone for this year’s event! Near the docks of the San Francisco scare zone an attack of alien INVASION! that was set decades ago and a mysterious vessel that crash landed for their scientific experiments.

“They aren’t just here to destroy; these invaders are also on a mission to learn everything they can about us humans. Careful, or you may find yourself on the experiment table at the mercy of an alien scientist.”

This is no surprise for long time Halloween Horror Nights fans for roaming hordes running around scaring the living daylights out of guests. “This time, it’s the smell of the greasepaint, the roar of the chainsaw. Unhappy with how popular culture has made clowns scary, this grotesque gang of gigglers has risen from the grave determined to show the world that if you want scary clowns, they’re going to make sure you get your worst nightmare.”

If you think you “can’t handle anymore!” for this year’s event, well good news for you Horror Nights fans! Award winning and recognized from popular talent shows like, America’s Got Talent is the return of Academy of Villains: Afterlife. Last year was their first debut for Halloween Horror Nights 26′ with the theme of an insane asylum between patients and medical personal.

“This group of powerhouse artists will make you bear witness to what happens after we leave this life. They’re going to give you one mind-blowing and shocking dance performance that will escort you from this world to the great beyond.” 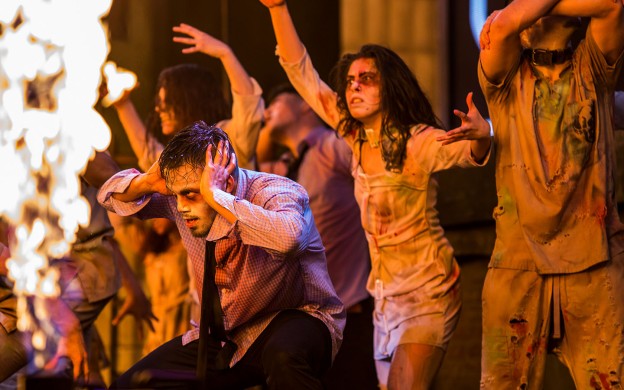 So far 4 out of the 5 houses have been announced and with the last one as speculation for a mashup house of “Blumehouse Productions” to deliver some of their catalog and most recognizable and fan favorite films for this year’s event. Bill and Ted’s Excellent Halloween Adventure will be delivering one last epic party for this year as a send off for fans who long supported the show.

Halloween Horror Nights 2017 is approaching upon us and starting up this September 15th towards November 4th and for tickets and more information can be founded here. For everything Universal Parks & Resorts and all other themed entertainment news, keep checking back here at SkywalkingAdventure.com