With no joke or pun intended in which news became official from the Universal Orlando Resort today and in which the Terminator 2: 3D attraction will be indeed “terminated”, starting next month on Sunday, October 8th, 2017 for it’s final shows. Universal has not stated of what will be replacing the attraction and has stated that it will be making way “for an all-new live action experience based on-energy Universal franchise.”

Universal is no-brainer when it comes towards some of cinema’s most iconic franchises ranging from Harry Potter, Fast and the Furious, Jason Bourne, and Dreamworks Animation films. Also speculation can suggest from Director Guillermo Del Toro’s “Pacific Rim” as another option and long-termed rumored of bringing over “The Walking Dead” all year around house attraction from Universal Studios Hollywood from AMC’s blockbuster television series.

Check out the official press release down below from Universal Orlando and for everything Universal Parks & Resorts and all other themed entertainment news, keep checking back here at SkywalkingAdventure.com 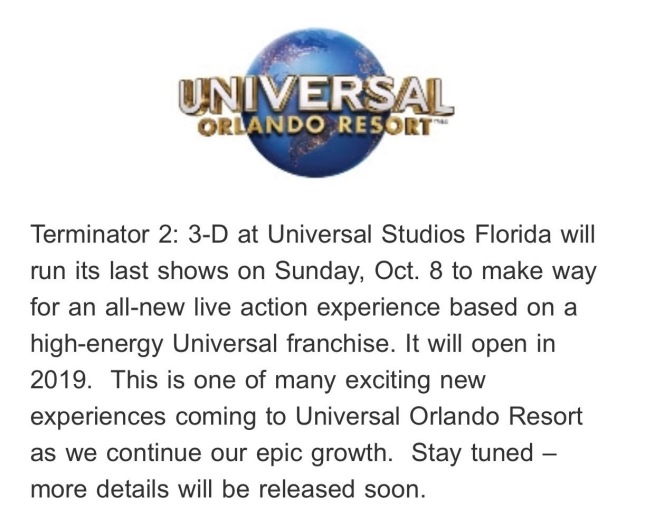 Source: Inside The Magic