Halloween has officially kicked off over this past weekend at the Universal Orlando Resort for this year’s Halloween Horror Nights 27. The park has unleashed all their amazing creations from their scare zones, IP and original houses, live entertainment, and so much more that this top premiere Halloween event has to offer this year. If you’re a first timer towards the event, be sure to check out this overall guide of what you can expect that the resort has all waiting in store for you.

Now when it comes towards Halloween Horror Nights in which majority of frequent visitors are locals and sometimes from the outside of the area too that go towards the event. However it’s mainly because of the intellectual properties that people wanna see and get scared about because of a certain character that they really like and come face to face in person.

In this post we will be focusing on the Top 5 Haunt characters based on the intellectual properties you must see at Universal Orlando’s Halloween Horror Nights and why you should see them based on their popularity and significance towards the pop culture world. Not every character will be mention on this list since it was so hard to narrow down but, this an overall personal selection of how well-known these characters are.

So let’s hope right into it! 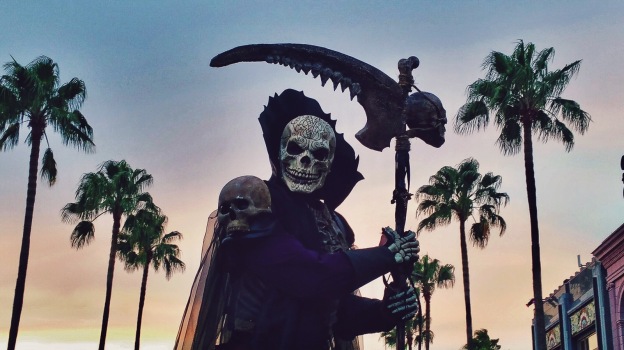 Now let’s first begin with “Bones” even though he’s not an IP character but, it’s important to take notice that Universal Orlando always base on a certain theme or an icon for their event. Even though no official icon was announced this year like in years prior towards it but, this year you can encounter “Bones” which is their unofficial icon for theme of the “Festival of the Deadliest”. This character isn’t uncertain since the event just started over the weekend of how his popularity will be, since his face is all over the event’s merchandise products from hats, tees, shot glasses, wallets, etc.

The approach Universal Orlando took for this character defiantly reflects on the “Day of the Dead” festival that is celebrated in Hispanic culture and has taken upon towards many other haunters in the industry and the pop culture world. “Bones'” giant scythe and all the overall detail is astounding from head to toe with being a stilt walker actor makes you feel small in size for comparison against him. You can find “Bones” and rest of his followers by the Hollywood area next towards Terminator 2: 3-D of the park.

If there is one certain franchise that has overtaken the horror genre and changed the way we thought about gore and some of the most gruesome kills, it would be defiantly the “Saw” franchise. The first release of the “Saw” film back in 2004 that was distributed by Lionsgate Films and produced by Twisted Pictures for this film franchise in how the most creative and puzzling of the criminal and trap master killer of “Jigsaw” takes upon his victims. Billy the creepy doll on a child tricycle was considered to be part of this list but, this was given towards the “Jigsaw Pig Mask” for a certain reason.

Jigsaw played by the long running actor of Tobin Bell and within certain points of the film series that other’s follow his legacy of what he created and others that wanted to continue his legacy as his own personal followers. Bell’s character if you seen the third installment was “supposedly” killed off and then re-introduced back into the series later on as the story goes. The “Pigmask” is a way of his followers to capture and knock out his victims because his followers are like Jigsaw but, the victims think it’s Jigsaw to make them terrified and paranoid about him to it give that mysterious vibe behind it.

The franchise has been utilized in past and this year’s Halloween Horror Night’s events in Orlando and Hollywood and also in comics, video games, other films, and even a roller coaster at Thorpe Park in the United Kingdom of how much it has over taken the pop culture world. You can experience the “Jigsaw Pigmask” in the scare zone for “Altars of Horror” when you first enter the park and also the house for “Saw: The Games of Jigsaw” at Universal Orlando.

This number 3 spot is a no given brainer or probably one of the most famous faces in undead 80s horror of cult-classics of the “Evil Dead” series and played by then no other than Bruce Campbell. First started off of a three-part film trilogy and then reintroduced years later as now a popular television series of Ash vs. Evil Dead on the STARZ channel, in which “Ashy Slashy” is back once again. Campbell has played many other roles in the business and is also author for his own books but, many fans will also treasure and love of what Ashley Williams accidentally released many years ago for the demonic forces that overtaken earth in the cabin the woods and also in the TV series.

The franchise lives up towards of what is expected in a typically 80s undead horror series of the witty, comedic, and cheesy lines that Campbell plays in both the films and television series. For this year in which Halloween Horror Nights in Orlando takes upon the TV series from both Season 1 and 2 with the 3rd season still to be announced. You will experience some of the most gruesome kills, most famous scenes, and funny moments of Ash Williams from the seasons. This is something that teams at Universal have never done and you will be both scared and laugh at the same time for those that are big “Evil Dead” fanatics.

Campbell’s influenced has overtaken the pop culture world in many video games, music, and other films in ranging from Duke Nukem 3D, Warcraft III, Shaun of the Dead, “Donnie Darko” etc. You can grab yourselves a drink and party on with Ash Williams and slay deadites with him and his gang for this fun experience at Halloween Horror Nights.

Since we are on the subject of cult-classics and to fit of what the holiday of Halloween is all about but, you have to make sure you follow the rules of Halloween or else. This year for the event in Orlando is what more than a perfect fit to bring the Halloween cult-classic, of “Trick R’ Treat” created and directed by Michael Dougherty. Dougherty’s character of Sam if not, is one his most highly popular characters he has done for this time of the year for the holiday.

Sam is described as Dougherty’s and his own “Frankenstein monster” because he witnesses the people as a policeman who love or not love the holiday, and for those that don’t must face the consequences. Sam’s personality is just a small adorable child with his species being a pumpkin head character in the inside but, with a wrath of a killing-spree for those that just don’t believe in the holiday for Halloween that makes him upset. Halloween followers also make sure that they give out candy towards trick-or-treaters, make sure they’re Jack-o-Lanterns aren’t blown out before midnight as traditional ritual of how Halloween should be celebrated.

Now these days in which Halloween lovers and haunters adore Sam as part of the classic monsters and slashers genre of how much everyone reflects of what Halloween is all about in the pop culture world. No official confirmation yet for a sequel yet but, Dougherty said there is one in the works or no release date yet. You can find Sam and the other characters in the Central Park area of the park and also the Scare Actor Dining experience at Universal Orlando. 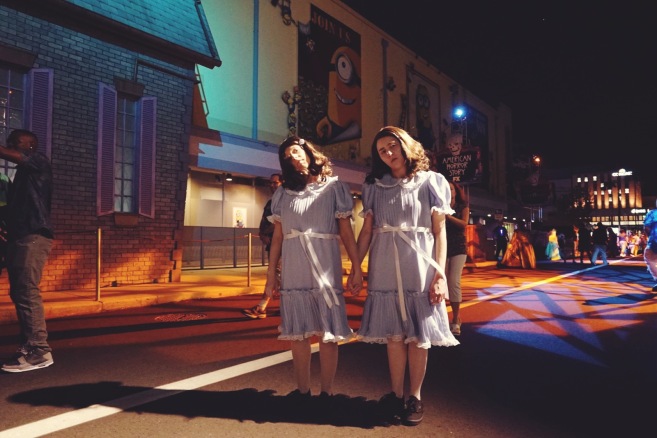 The final spot for this Top 5 was a legit hard one because so many characters from the horror genre are too good to pass up. If you are though a frequent travel or you travel for work and stay at many hotels and have “Bathophobia” or the fear of hallways then, these two iconic and classic characters are possibly the most recongizable for the genre. This year in which the famous duo of The Grady Twins are at this year’s Halloween Horror Nights in both the “Altars of Horror” scare zone and the long-awaited from Stanley Kubrick’s adaption on of Stephen King’s “The Shining” as a house.

Halloween Horror Nights took the permission from the Kubrick family and not Stephen King for the rights to be used at the event and took them many years to be part of this iconic film. It can be said that the rights for “The Shining” were long as “The Exorcist” (last year) to be used and could be evenly matched cause of the legally and copyright that weren’t easy to be obtained. This was one of the most highly technical and detailed challenges that the creatives at Universal were trying to pull off for and for the fans of the event to relive some of the most famous scenes throughout the film.

Author and Writer, Stephen King for the Grady Twins took inspiration for his novel of “The Shining” of his own daughters and then adapted by one of cinema’s most famous directors of Stanley Kurbrick in towards that iconic scene that we all know of. The fact that Kubrick was able to nail that shot and was able to lower the camera to follow Danny on his bike and roaming around to give it that creepy and ambiance atmosphere. Children in horror films are defiantly a certain caliber of its own that are creepy and giving that psychological feel of feeling alone and distant from everywhere. Also in which Haunters in the industry of child-actors of legal age make good and unpredictable scare tactics for their guests and not expecting their reactions of they will get.

The fact these iconic twins influenced heavily on today’s pop culture world from the obvious in film, television, and many others is the idea of which the Twins translated their image of what we think about in the certain fandoms that we know and are part of. No other director than Stanley Kubrick was able to execute these iconic duo of the Twins so well with precision cinematography and set design that was described in King’s novel and will be part of cinema history’s most famous pair of characters of the horror and psychological/thriller genres.

The Grady Twins are able to take photos in the “Altars of Horrors” scare zone when you first enter the park at Universal Orlando but not inside of the house for “The Shining”. Hopefully this list can make you more anticipated for the event since so many dedicated team members and creatives that put their hard work contribution and sweat in making this the best Halloween event every year for the whole resort. If their was a character you didn’t feel like that didn’t make the list or disagree, leave it in the comments section down below!

Halloween Horror Nights 27 kicked off this past weekend on September 15th and will run till towards November 4th, 2017 for more nights of fun and terror! For everything Universal Parks & Resorts and all other themed entertainment news, keep checking back here at SkywalkingAdventure.com