The Disneyland Resort has been booming in announcements today and if you didn’t catch about the new hotel coming towards Disneyland opening in 2021 in which it can be read upon here about it. To also add in addition towards these announcements in which part of Disney’s multi-year expansion of upgrading, improving, and adding additional parking structures that have been long in the works for the company.

The brand new 6,500 space structure will be designed to drastically improve parking and traffic flow conditions in the resort. Part of this plan is to be the centerpiece to be built on the current Pinocchio surface parking lot next to Mickey & Friends area. This should help and is expected to boost up guest arrival by providing 60 percent increase in the number of access lanes and additional parking capacity on the west side of the resort.

Construction is scheduled for February 2018 with the second structure to open the following year in 2019 and same year as Star Wars: Galaxy’s Edge at the Disneyland park. However though, there is more towards this story to help the guest flow of attendance in towards the park of a project that was very long in the works. 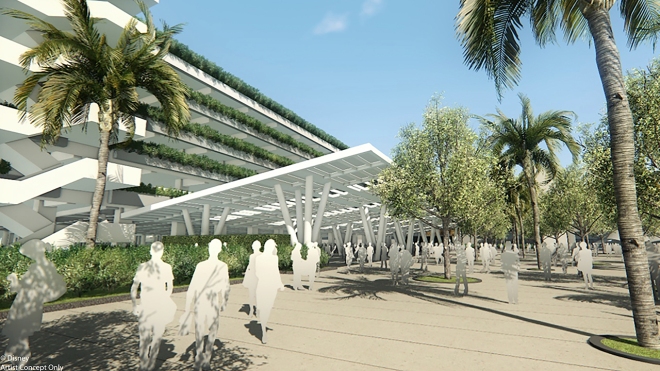 If you recall towards the long development of the Eastern Gateway project and with this official announcement by Disney in which that project has been cancelled as the result for these additional parking structures and here’s why.

The project was originally to be proposed on Harbor Boulevard towards the opposite of Disneyland’s two theme parks and with confirmation of the Orange County Register with Disneyland officials that the project will “not proceed”. Disney had intended to build a pedestrian bridge over Harbor Boulevard with “a seven-story, 6,900 parking structure along Disney Way as new transportation hub with a security screening.” Some local business in the city of Anaheim of being up for controversial debate even cross comparisons with Disney’s other popular theme park in the East Coast at Walt Disney World in Orlando, Florida and there business in Florida. 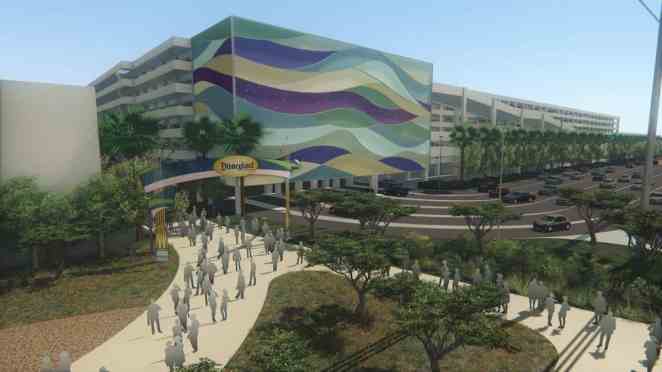 With local tensions between Disneyland and city of Anaheim that the Eastern Gateway project that once was envisioned and now cancelled and left abandoned as the result of the new parking structures.

The local government of the Anaheim City Council raised certain concerns and with not friendly relationships between Disneyland and the City Council as one of many reasons of why they denied Disneyland to build the bridge over Harbor Boulevard. The Gateway project was proposed a $1 billion dollar project and was originally scheduled for completion in late 2018. The developments that were announced today on the western side of Disney property will not be affected by those restrictions.

“A city spokesman said the new parking structure is expected to fall under the 2015 entertainment tax policy that increases attendance at the theme parks or result in longer stays in Anaheim.”

“Disney officials said they have no plans to develop the Eastern Gateway and will keep the land vacant. The Carousel Inn, which they purchased for $32 million in 2015, will be razed in the coming months. There’s a possibility Disney will revisit developing in the future.”

Disneyland has already entitlements to build up towards 16,700 parking spots in and around the Mickey & Friends parking structure, according towards the city staff. Even though the city of Anaheim and Disneyland seems a bit not in favors of meeting in the middle but, their has been some upsides of positive reactions from the city.

“Our residents are going to benefit,” Murray said. “Not only will this development create more construction jobs for the union and other permanent jobs at the new hotel, but the additional revenue from the hotel and new restaurants will help fund the city for decades.”

The Eastern Gateway project was a big vision and possibility to bring in guests and enjoy the park and soon of the coming expansion of Star Wars: Galaxy’s Edge in the coming years in 2019. It was a big gamble situation that Disney and the city of Anaheim were playing a game hardball against each other between a big billion dollar company like the Walt Disney Company and Anaheim was help protecting and brings concerns of their local businesses around them.

Between both ends of them that they are still pleased and confident to help the traffic and guest flow in towards the parks and are certainly going to need it once the Star Wars expansion opens up. With the Mickey & Friends parking lot as one of the popular parking locations on the resort that Disneyland is certainly going to need these two new parking structures to make less time to park and more time to enjoy the parks.

Never say never and if something works out we could see the Eastern Gateway project finally realized later down in the coming future. For everything Disney Parks & Resorts and all other themed entertainment news, keep checking back here at SkywalkingAdventure.com