Huge news coming out from Tokyo, Japan today between The Oriental Land Company who are the owners and operators of the Tokyo Disney Resort and The Walt Disney Company will be expanding very large for Tokyo DisneySea. 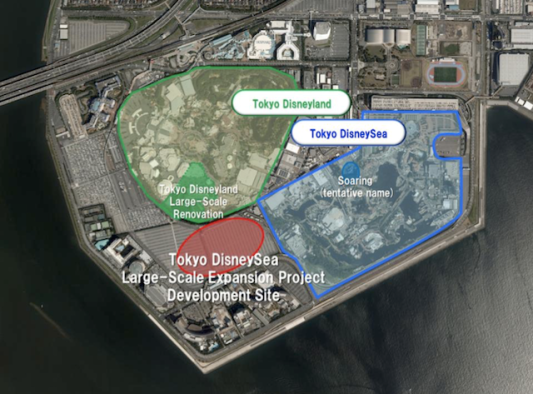 The expansion will be a 250 billion yen ($2.27 billion USD) project for park and subject to open up some point in 2022. The expansion will be located over a surfacing parking area right behind Tokyo Disneyland and will be a brand new DisneySea “port” or an “eighth port” that will include highly themed and immersive lands from Disney’s animated film library and be including; “Frozen,” “Tangled” and “Peter Pan”. This will also include a brand new deluxe hotel with a one-of-a-kind luxury wing that will be connected towards the port.

The Oriental Land Company has said that and “agreed a 30-year extension to its license with Disney, taking it to 2076” according towards Variety.

As one of Disney’s most highly themed and immersive environment parks internationally for Tokyo DisneySea and is inspired by the myths and legends of the sea and is known to guests for its seven themed ports: Mediterranean Harbor, American Waterfront, Port Discovery, Lost River Delta, Arabian Coast, Mermaid Lagoon and Mysterious Island.

The newest port will be themed towards” magical springs and the genre for Disney fantasy” and will include four new attractions. Here’s the breakdown of what Japanese locals and international guests can expected when visiting Japan.

Artist Concept Only for the “Tangled” area for Tokyo DisneySea. Source: (©Disney)

This area will invite guests “into the charming forest where Rapunzel’s tower awaits. Guests can board gondolas for a romantic tour of Rapunzel’s “best day ever” as she journeys with Flynn to the lantern festival for an unforgettable finale. Also on the menu is a restaurant inspired by the hideout of the humorous band of thugs in the movie.’

Artist Concept Only for the “Frozen” area for Tokyo DisneySea. Source: (©Disney)

Step inside the kingdom of Arendelle “after the events in “Frozen,” once the kingdom has opened its gates to visitors. A heartwarming new attraction will take guests by boat to experience the story of Elsa and Anna while enjoying iconic songs from the hit film, and a new restaurant will be located inside Arendelle Castle.” 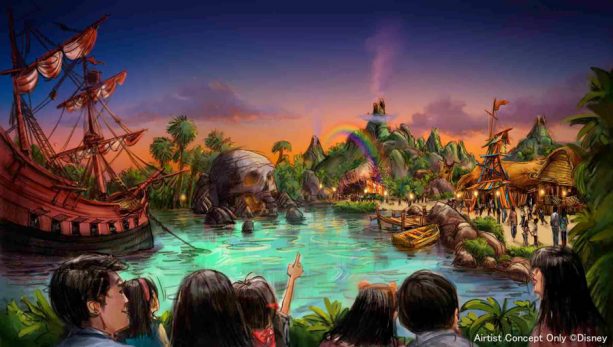 Artist Concept Only for the “Peter Pan” area for Tokyo DisneySea. Source: (©Disney)

After the clock hits midnight in London, England on Big Ben and “Neverland will come to life for guests, including Captain Hook’s pirate ship and Skull Rock. The area will feature two new attractions and a restaurant inspired by the Lost Boys hideout. In the first attraction, guests will fly over the jungles of Neverland with Peter Pan to rescue Wendy’s younger brother, John, in a battle with Captain Hook. The second attraction will immerse guests in the world of Pixie Hollow where Tinker Bell and her fairy friends live.”

Artist Concept Only for the brand new deluxe hotel that will connect towards the new port at Tokyo DisneySea. Source: (©Disney)

As one of Tokyo Disney Resort’s newest hotel additions and will be “themed to Disney fantasy, the hotel will rise above and around the magical springs of the new themed port, featuring 475 deluxe and luxury guest rooms, two restaurants and a merchandise shop.” Next door at Tokyo Disneyland with now the resort currently expanding with a brand new “Beauty and The Beast” and Big Hero 6‘s expansions that will be opening up some point in 2020, just in time for the Tokyo Summer Olympic Games.

Tokyo Disney Resort is celebrating its 35th Anniversary “Happiest Celebration!” going on currently and more details will be released for the developments of the resort at later given time.