Over the course since last year in October and in which one of Universal Orlando’s longest running nighttime spectacular’s for Cinematic Spectacular: 100 Years of Movie Memories ended. This was to celebrate Universal’s 100th Anniversary back in 2012 of their cinematic library of motion pictures that they have created, even though the lagoon show was showing its age and needed more of state-of-the-art technology upgrade.

Today, in which Universal Orlando has officially confirmed that the resort will be getting a brand new nighttime spectacular by the lagoon called, “Universal’s Cinematic Celebration”. This brand new show will run about 20-minutes long that will include some of Universal Studios’s library and biggest franchises.  These will include: Jurassic World, Harry Potter, Despicable Me with the Minions, and the Fast & Furious franchise.

Here’s the full description of the show as Universal Orlando is describing it as:

“An epic new show is lighting up the night at Universal Studios Florida™ with a colossal celebration of music, water and light that transforms the park and takes you into the movies like never before. As music from the world’s biggest films fill the air, scores of shining, dancing fountains erupt. Massive walls of water blaze with incredible movie moments and powerful projections bring the entire waterfront into the movies. You’ll see and hear roaring dinosaurs from Jurassic World, feel the adrenaline rush of high-speed cars from Fast & Furious, watch the mischievous antics of the Minions from Illumination’s Despicable Me, and so much more. Don’t miss the amazing new show that’s making nights at Universal Studios™ brighter and bolder than ever.”

The show will be utilizing “more than 120 dancing fountains, and projection mapping; using the entire waterfront and surrounding buildings.” according towards Inside Universal.

Universal Orlando has also introduced another nighttime show that is seasonal during the winter and summer at The Wizarding World of Harry Potter in Hogsmead Village at Islands of Adventure for, “Nighttime Lights at Hogwarts Castle” that celebrates the houses of Hogwarts and in which fans can support their favorite houses from; Gryffindor, Slytherin, Ravenclaw, and Hufflepuff. This was first introduced at Universal Studios Hollywood last year, as part of their Wizarding World expansion at the park. 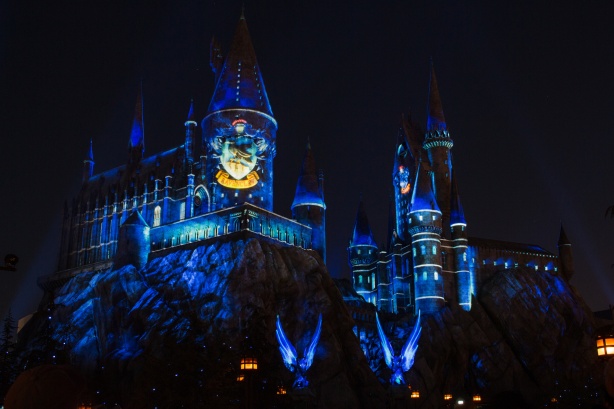 “Universal’s Cinematic Celebration” will debut some point this Summer 2018 with no confirmation of a date yet and will be running on selected nights throughout the year. For everything Universal Parks & Resorts and all other themed entertainment news, keep checking back here at SkywalkingAdventure.com