This summer in where fellow witches and wizards can grab themselves a cold butter beer and light up their wands because the long awaited and rumored map projection show from The Wizarding World of Harry Potter at Universal Studios Hollywood got confirmed today.

Just to recap to bring you up to speed with this map projection show in which, it’s the same exact one that blew everyone’s minds off from the grand opening ceremony last year in April of the Hogsmead village. This was done with legendary film composer of John Williams and the LA Philharmonic Orchestra of memorable film scores of the Harry Potter franchise.

The show will be kicking off this summer on June 23rd, 2017 that will be all “up in your face” of how it was done during the ceremony, but without John Williams being their in person and his films scores from the films will be in sync with the map projections.

The house of Ravenclaw projected over the Hogwarts Castle for the nighttime spectacular coming this summer at Universal Studios Hollywood. Source: (©LA Times)

“We really wanted the guests to have that bone-chilling moment and go, ‘Wow, this is something I’ve never experienced before,’” said Stacey Quinealty, the park’s senior manager of audio and visual production. “It’s really spectacular.”

“If you think of the series, that soundtrack — particularly the John Williams soundtrack — it’s such a part of the emotional experience,” said Tim Runco, the park’s senior vice president of entertainment. “We spent a lot of time figuring out how to bring that out in a way so that’s it not just playing to you. ‘Immersive’ is really an overused word, but we really did bring people into it.”

When night time falls and Potter fans will be in the amazement of shock and awe as they see their favorite houses of Gryffindor, Hufflepuff, Ravenclaw and Slytherin, being represented in HD quality format of these projections. The map projection show will be a multi-channel system; with eight different models of speakers with the 3-D map projections and guests will experience it differently depending where you wanna watch it from.

Universal Orlando Resort will have a similar map projection that was announced last month but, themed towards the Harry Potter films around the holiday time season that fans have been demanding for a while now. 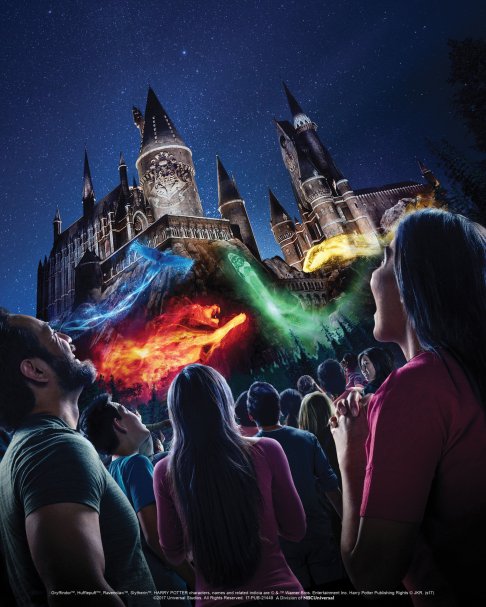 Experience this magical experience this summer at Universal Studios Hollywood like how it was last year April when it first opened up. Here’s the full press release and description about it:

“The colorful state-of-the-art light display and special effects projection, designed to dance across the stunning Hogwarts castle, will be accompanied by a special musical arrangement created by Academy Award-winning composer John Williams based on his original scores composed for the film series. The musical arrangement that will emanate in a surround sound environment was conducted by prolific arranger William Ross and recorded by the London Symphony Orchestra in London.”

For everything Universal Parks & Resorts and all other themed entertainment news, keep checking back here at SkywalkingAdventure.com