With the release of The Incredibles 2 after almost of a decade wait for 14 years later and smashing box office records with a $182+ opening weekend and which the Parr family and their fellow family friend of, Frozone has officially joined the highly popular nighttime parade spectacular for “Paint the Night” yesterday. 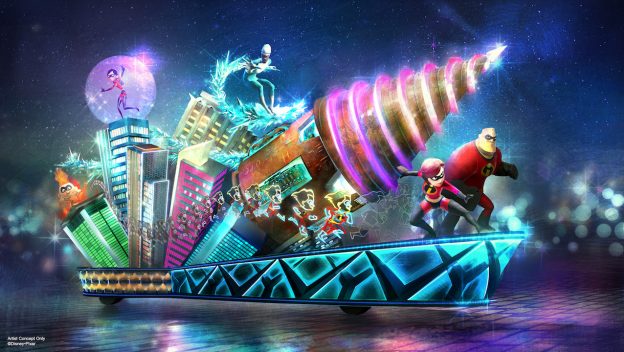 This particular parade float features hundreds of LED packaging lights, strobes, and tons of details from the beloved super hero family. The Parr family featuring; Mr. Incredible, Elastigirl, Violet, Dash, and the ultimate powered super-baby of Jack-Jack as well with Frozone as they save the day from the Underminer in a nighttime setting.

Each of the supers and showcases their powers in this stunning visually nighttime parade ranging from Frozone’s icy powers, Violet’s forcefield, and Dash running around at high velocity speeds, and Jack-Jack showing off his pyro powers.

“Paint the Night” first debuted in 2015 as part of Disneyland’s 60th Celebration and next moved next door towards Disney California Adventure in being swapped with “Pixar Play Parade” as part of “Pixar Fest” running now till September 3rd, 2018.

The Incredibles 2 is now playing in theaters as one the highest grossing sequel animation films of all time and check out the video down below for “The Incredibles” parade float down below and for everything Disney Parks & Resorts and all other themed entertainment news, keep checking back here at SkywalkingAdventure.com