“There was an idea. To bring together a group of remarkable people, to see if they could become something more. It was called the Avengers Initiative.” -Director Nick Fury of S.H.I.E.L.D.

As it was announced earlier this year and Marvel is expanding globally at most of the Disney Parks internationally except, Walt Disney World in Orlando, FL due towards the contract with Universal.  The Walt Disney Company’s next phase of park construction with Marvel will be opening up some point later, after Star Wars: Galaxy’s Edge opens up at both Disneyland and Walt Disney World next year. However though, here’s what we know what’s coming towards the Disney Parks worldwide from the following:

‘The Stark Expo in Hong Kong was to be a first step: A world exposition whose theme of ‘A Better Tomorrow Today,’ was meant to inspire and motivate through technological innovation. However, shortly after it opened, the Expo was attacked by the forces of Hydra. When even more powerful forces threatened the entire planet, the Avengers realized that the Earth needs more heroes.” 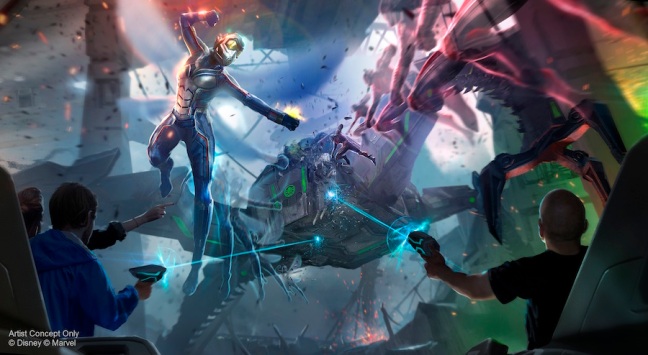 “In California and Paris, Tony Stark is retrofitting two of his father’s Stark Industries sites into new hubs for training and innovation. Through partnerships with S.H.I.E.L.D., Pym Technologies, Masters of the Mystic Arts and the new Worldwide Engineering Brigade, The Avengers and their allies will forge new global campuses to champion the next generation of heroes. Who’s ready to answer the call?”

Scot Drake Creative Executive, Marvel Global Portfolio at Walt Disney Imagineering with his teams are working closely and collaborating with Marvel Studios and Entertainment where you can visit your favorite attractions and experiences from the Marvel universe at Disney Parks and Resorts.

In Hong Kong Disneyland, guests will be assisting Tony Stark against the forces of Hydra for the “Iron Man Experience”. Starting in March 2019, and guests will able to join “Ant-Man and the Wasp” in a fight against the Arnim Zola and his evil army of Hydra Swarm-bots for all new attraction called, “Ant-Man and The Wasp: Nano Battle!”.

Guests have been helping the Guardians of the Galaxy for their attraction, “Mission: Breakout!” at Disney California Adventure that opened up last year. For both Disney California Adventure and Disneyland Paris, will encounter the heroes in all new exciting new ways. Disneyland Paris will be getting a “re imagined Rock n’ Roller Coaster” for a hyper-adventure with Iron Man and now “confirmed” that, Spider-Man will be replacing the “Armageddon” attraction that will be opening up in April 2019.

Rock n’ Roller Coaster will be reimagined towards an Iron Man attraction that was announced at D23 Expo Japan earlier this year. Source: (©Disney/©Marvel)

From Doctor Strange’s mystic arts towards your friendly neighborhood, Spider-Man to defy gravity tests around New York City is what you can expect for these new experiences of the Marvel Cinematic Universe.

Guests will also have the chance to test out the latest in Pym technology with Ant-Man and Wasp and also get to see; Captain America Captain Marvel, Iron Man, and Black Panther and more as they leap into action.

No mention for the “Avengers” themed attractions for the Disney Parks as many were speculated it to be but, stay tuned here for more further updated details.

For everything Disney Parks & Resorts and all other themed entertainment news, keep checking back here at SkywalkingAdventure.com.

Check out the announcement trailer for the Marvel themed experiences that was released earlier this year.