Just recently in which Disney held a post-media panel for what’s next for Disney Parks after the grand opening of Toy Story Land held today, at Disney’s Hollywood Studios. First off and in which, Disney shared more details for the upcoming “Mickey and Minnie’s Runaway Railway”. It’s been a while since we were last shared about details for the upcoming attraction that replaced “The Great Movie Ride” and today we got some of those new details. 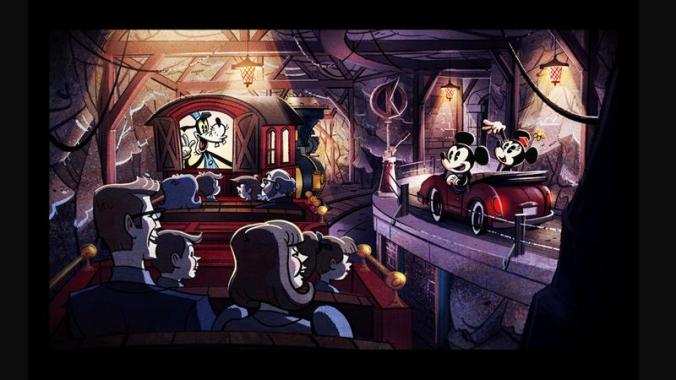 Artist Concept Only for one of the scenes for “Mickey and Minnie’s Runaway Railway” opening at Disney’s Hollywood Studios. Source: (©Disney)

“The attraction will totally immerse guests in a cartoon world and will feature a new catchy theme song created especially for the attraction.” according to Disney

Guests will attend a premiere of a brand new cartoon short with Mickey and Minnie as they prepare for a picnic. The duo will head out, as they drive alongside a train and discover the person in charge driving the train is no other then Goofy! A magical moment will happen as you step inside the screen and on board the train, as conductor Goofy himself will give guests a whimsical and fun ride.

Disney is calling it as a “2 1/2 D” experience that was announced at D23 Expo last year in Anaheim, California and Walt Disney Imagineering are working with their fellow partners at Disney Television Animation. Guests can join Mickey and his friends like nothing before in making it an immersive and detail storytelling experience. “Mickey and Minnie’s Runaway Railway” will be opening up some point in 2019.

The next announcement that was made by Disney, was a brand new show coming also towards Disney’s Hollywood Studios from Pixar’s “Cars” franchise and will be entitled “Lighting McQueen’s Racing Academy”.

Imagineer Kathy Magnum who was at the media panel and has stated that,

“It will be “a show unlike anything we’ve got anywhere else,” and appearing with Lightning McQueen in the show will be Cruz Ramirez and Mater”

The venue for this new show location will be located inside the Sunset Showcase near “Rock N’ Roller Coaster” and will be up against the champion himself, Lighting McQueen. Lighting’s friends of Mater and Cruz Ramirez will also be part of the show as well, and McQueen will be showcasing his racing skills that his fans have known years now from all across the world.

“Lighting McQueen’s Racing Academy” will be opening “early 2019” at Disney’s Hollywood Studios at Walt Disney World. For everything Disney Parks & Resorts and all other themed entertainment news, keep checking back here at SkywalkingAdventure.com