Disney Parks, Experiences and Consumer Products Chairman Bob Chapek just dropped the bombshell of news for what is next coming towards Epcot at Walt Disney Resort as of yesterday he was teasing the news in celebration of Mickey’s 90th at the D23: Destination D event.

Epcot is undergoing a multiyear transformation for so many new additions coming towards the park including, new details for nighttime entertainment and additions for the World Showcase. Here’s what they are and strap yourselves in because it’s A LOT for what’s next for Epcot.

One of those announcements for a brand new nighttime spectacular is coming as which Disney did announce earlier this year that “Illuminations: Reflections of Earth” is officially retiring for good. The new show is planned to be opening up in 2020 at the lagoon in the World Showcase area.

However, Disney did confirm a interim show will be coming to Epcot and titling it “Epcot Forever” which will debut in Fall 2019 to hold fans over until the new “unannounced titled” show comes some point in 2020. The interim show will provide classic Epcot tunes with a spark of imagination that swells into an epic spectacle of fireworks, music, lighting, lasers, and special effects kites.

Check out the concept art below released for the new upcoming nighttime shows coming to Epcot.

Chairman Chapek did confirm the official name for the “Ratatouille” attraction from Disneyland Paris for Epcot and will be called “Remy’s Ratatouille Adventure”. He also shared that, a new guest offering is will soon to debut for the France pavilion at the World Showcase for “Impressions de France”. Don Hahn as many you know, is the producer for both the animated and live-action “Beauty and the Beast” is creating a brand new sing-along for the pavilion. No announcement yet of when the new sing-along will debut. 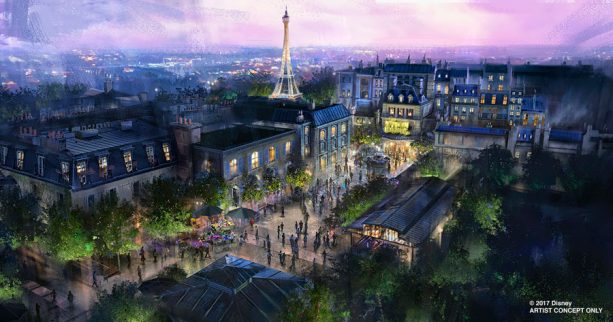 In addition to Impressions de France, a new Beauty and the Beast sing-along experience will debut at the France pavilion at #Epcot! @DisneyD23 #DestinationD @DisneyParks pic.twitter.com/ghKCqGFZs2

Also for the Canada pavilion, is getting an updated film and in the process for replacing the existing “O Canada!” 360-degree show much like the China pavilion got the updated 360-degree show for them.

The Canada pavilion at #Epcot will be getting an updated Circlevision show in the future! @DisneyD23 #DestinationD @DisneyParks pic.twitter.com/7wPnlUtSFr

So much new content is coming towards Epcot and what news are you most excited for the most to see?! Stay tuned for more of the Destination D event and for everything Disney Parks & Resorts and all other themed entertainment news, keep checking back here at SkywalkingAdventure.com.