Earlier this year back at the D23 Expo this past summer in which we got the announcement of a new way of transportation would be coming towards the Walt Disney World Resort of the Disney Skyliner Transportation System. Well today in which Disney announced more details and concept art releases as part of their “12 Days of Disney Parks Christmas” of updates and developments coming towards the Disney Parks worldwide.

Now let’s take a scenic view of what you can expect of the Disney Skyliner coming towards the resort.

Now first up is which the Skyliner will connect towards on-property hotel resorts and theme parks at Walt Disney World in which will be the Caribbean Beach Resort station, Epcot station, Disney’s Hollywood Studios station, and Pop Century and Art of Animation Resorts Stations.

Now interesting enough that, the map that was shown off at the D23 Expo by Chairman of the Walt Disney Parks & Resorts, Bob Chapek for the Skyliner showed Disney’s newest DVC members hotel of Disney’s Riviera Resort and those details haven’t been officially released if plans had changed or not for connecting it towards the DVC Resort.

Chairman Bob Chapek of the Walt Disney Parks & Resorts reveals the Disney Skyliner announced from this past summer’s D23 Expo in Anaheim, California.

The Disney Skyliner will have cabins of iconic Disney characters incorporated in the exterior design to give it that visual appearance as if guests of the resort have their favorite Disney character riding along with them. These cabins will include from the “Fab Five”, figures from Disney attractions, fan favorites from movies, and many more.

The design of the Disney Skyliner station at International Gateway at Epcot will be inspired by the park’s nearby European Pavilions, and will be covered with metal and glass canopies, hand-painted murals and ornamental steel structures that harken back to the early 18th century Art Nouveau style. Guests traveling to Epcot via the Disney Skyliner will be welcomed to the park with a rare birds-eye view of World Showcase.

Now here’s what you can expect when taking the Skyliner from whatever on-site hotel your staying at to travel around the Walt Disney World Resort.

Disney’s Caribbean Beach Resort station will be the hub of activity for Disney Skyliner. This station is inspired by the open air village marketplaces of the Caribbean and will showcase the nearby resort’s architectural detailing and color schemes. At this station, passengers will be able to transfer gondola routes to reach their destination, or are invited to sit and admire the waterfront resort setting. Disney also announced that the resort will be getting an upgrade towards the area as part of the “12 Days of Disney Parks Christmas” in which can be read upon here. 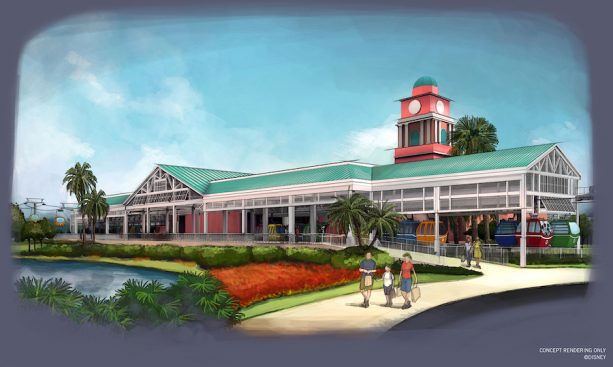 Next up is Disney’s Hollywood Studios station that will fit with that of the park’s main entrance and bus stations. Passengers traveling here from the Disney’s Caribbean Beach Resort station can expect a new aerial perspective of the park’s iconic attractions, like The Twilight Zone Tower of Terror.

As shown in the map up above from Chairman Bob Chapek from the D23 Expo in which Disney’s Pop Century and Disney’s Art of Animation will share a Disney Skyliner station that feels whimsical and contextual with both resorts. Upon departing the gondola station, Skyliner passengers will ascend over Hourglass Lake and enjoy a panoramic view of these two colorful resorts.

The Disney Skyliner turn-station along Buena Vista Drive, where guests can see the mechanical and aerial components that make up the Disney Skyliner. Disney has already filed permits for the development of the gondolas earlier this year but, no mentioning of when ground will break for construction in building them yet.

No official word yet hasn’t been announced for the Skyliner is set to open and it’s being said for inner speculation that this will be way done before Walt Disney World’s big 50th anniversary in 2021. Check out the video down below of the announcement from the D23 Expo of the Skyliner from Chairman Chapek himself.